Lake Charles, LA
October 21, 2018. Approximately noon.  Robin Benoit and her family are heading out of nearby Carlyss and into Lake Charles to attend a birthday party. They approach the 210 bridge from its west incline. As their vehicle ascends, all three adults in the cab see an object hanging in the sky over the bridge.
"It looked like a cylinder on its side," Robin says. "It was greyish. I couldn't tell exactly how big it was, but it was bigger than a plane."
Robin describes the craft as relatively low. "I am sure it was at least 300 feet high."
How fast was it moving? "It didn't appear to be moving at the time," she continues. "But I later found out, after looking at the pictures, it was."
Robin, sitting in the backseat with her kids, had taken pictures as well. She points out that the specific oil industry structures in the background of the photos indicate that the object was on the south-southwest side of the bridge.
"It wasn't a blimp. It had no fin," she notes at her distance.  Robin takes the time to submit a report to MUFON's sighting database, along with this pictures of the unidentified aerial craft. But she's not the only one. 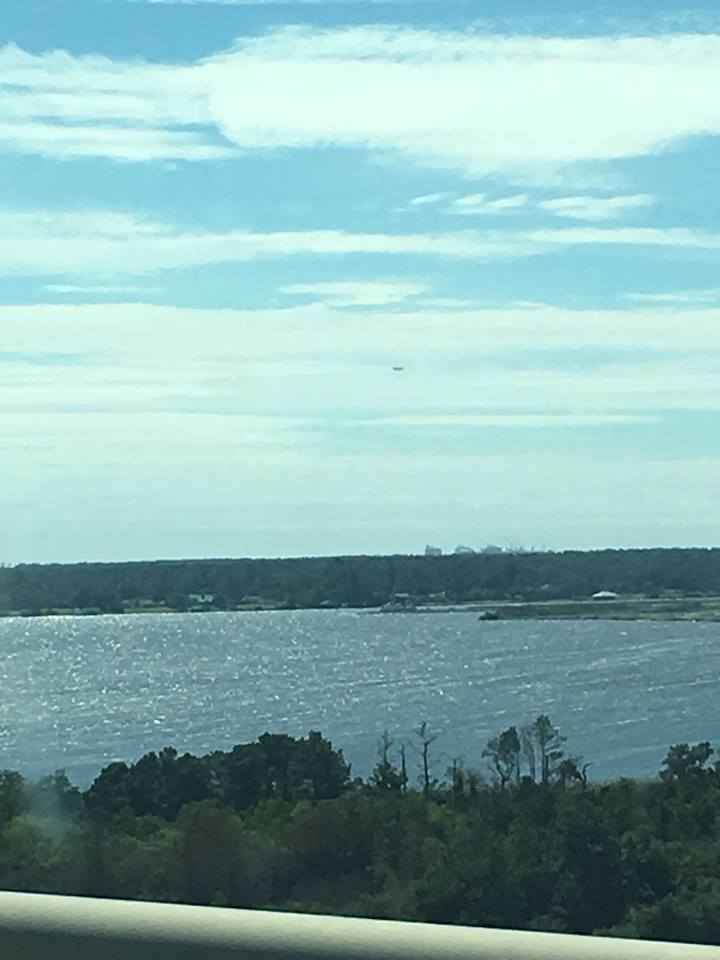 One of the pictures taken by Robin. The object is well-centered.
Around ten minutes later, David Cooley is traveling in a vehicle with his family over the 210 bridge. They are headed east. Something strange catches his eye.
"We were coming from Sulphur. We were almost on the 210 bridge when we noticed it."
Sulphur is about one mile from the base of the bridge on its west side. The bridge itself, fairly tall, rises to a maximum height of 125 feet. It spans the Calcasieu River and part of Prien Lake. On the east bank, it descends into the city of Lake Charles itself.
David, his wife, and two teenage children were perplexed. In the sky just northeast of the bridge, something rests motionless in the blue sky.
"I felt like it was something that was not supposed to be there," he recalls. He, too, describes the object as cylindrical. "It was grey or silver-looking."
As a passenger as well, David takes out his phone, and starts snapping pictures as the family climbs the bridge. The object continues to sit still in the air. It appears relatively low to David, too. "I would say five hundred feet or lower," he offers. 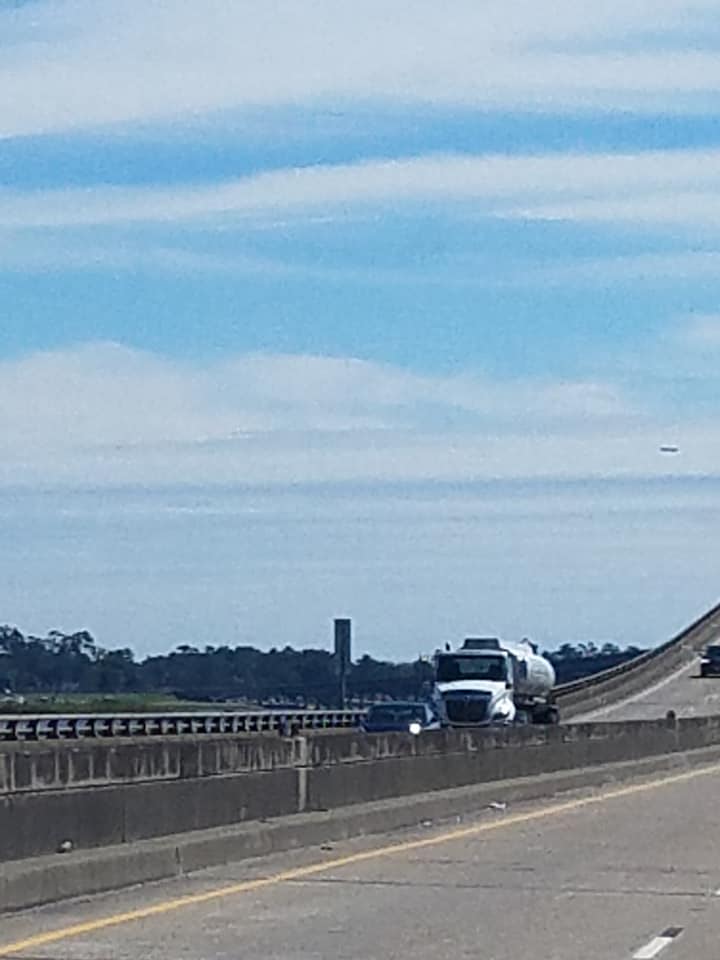 A picture taken by David. The object is to the far right.
What is substantially important about this sighting is that not only did multiple individuals, not knowing each other and from different vantage points, witness the object, but both took photographic evidence. Not only that, but both were so stirred by it that they took the time to write a report to MUFON. When we featured both of their pictures and accounts on our Facebook page, the two connected.
"I reached out to the other witness (David). We were both rocked to our core. I'm an appraiser, so there's a lot of research in my job. I researched the crud out of this," Robin says.
What she and our group discovered was that there was more to this event. Whatever the mystery craft was, its journey may have just been starting in Lake Charles.
Opelousas, LA
Scanning through both MUFON and NUFORC (National UFO Reporting Center) report databases online, both Robin and our group come across an account that was said to have occurred on the same day. The sighting was said to have taken place at approximately 3:15 pm. Because we do not know the name of the reporter, we only have the bare facts on their NUFORC report to go by.
"Oblong shape suspended in the southern sky to the south and west of Opelousas, Louisiana," reads the synopsis.
Again, here the object is described as not moving or moving very little. It also is described in a cylindrical way.
"I was driving back home from checking on my farm, when I saw an oblong shape suspended again in the southern horizon. I estimate this shape was eight to ten miles from my position."
Whatever it was, it was strange enough to cause the driver to stop their vehicle in observance.
"I pulled off to the side of the road, and observed the shape for ten to fifteen seconds," the person writes. "It did not move. It was perfectly still, and was at a slight angle in the sky."
It's hard to intimate specifically what the 'angle' observation means, but perhaps the cylinder was tilting up or downward?
"After that, I drove to my home--approximately one mile from where I was parked--to retrieve binoculars. I could not see the shape from my house due to the trees, so I drove back to the spot I was at. I estimate this took me four to five minutes."
That, turns out, was too long. "By the time I got back to the position I last saw it, it was not in the sky."
Unfortunately, there were no pictures accompanying the Opelousas report. But the next person to spot the object would do one better than a still shot.
Pass Christian, MS
The next day, about 180 miles due east of Opelousas and at approximately 9:30 am, another individual caught sight of the craft. From their beach house along the Gulf of Mexico, they documented on MUFON a series of more complex events this time.
"An apache helicopter passed by at low speed and altitude from the west over the gulf's airspace," they began. "Minutes later, a greyish, oval-shaped, elongated form passed by considerably slowly, leaving ominous atmospheric anomalies in its wake."
What were these 'atmospheric anomalies'? Did something happen to the clouds? We don't have a further description of this. But we do have video.
This reporter recorded eighteen seconds of the craft slowly drifting over the gulf waters. It appears almost identical to what had been photographed in Lake Charles. Only the object is featured in the video. But the reported added more.

The Pass Christian video.
"Minutes later, another smaller, disc-shaped object passed by leaving atmospheric anomalies."
This detail hadn't been a part of the other three accounts. But then, neither was the military helicopter. What was happening here? Was the object escorted, watched, or chased? What was the role of the secondary UFO?
Piecing the truth together
The first, most obvious rule-out for what was seen would be a blimp. In fact, on our Facebook page, a number of commenters felt this was the case.
Blimps travel at a top speed of just over seventy miles an hour, but usually keep to a cruising speed of fifty miles per hour. At this speed, a blimp would be able to make it from Lake Charles to Opelousas between noon and 3 pm. But who did it belong to, then, and why travel over this particular stretch?
Could this have been a military blimp? Blimps are indeed still utilized by the US military. In particular, the JLENS program uses them to monitor for boats, ground vehicles, and cruise missiles. The issue here is that a JLENS blimp is tethered--they are stationary, and don't normally roam the gulf coastline.
Another possibility: a drone. Of note, the oil industry plants that line the Calcasieu River in Lake Charles do indeed utilize drones to monitor project progress and security. But those are relatively small, maneuverable aircraft--clearly not the large object photographed over the 210 bridge.
The purpose of The Old Number 7 Society, our organization, is to document and attempt to understand the truth behind any purported paranormal phenomenon. Many times, we are left without a concrete understanding for how subjects of our investigations are occurring. But, occasionally, we get an answer--as in this case.
Following up on what our commenters had suggested, we contacted Goodyear regarding the whereabouts of their world-famous airship. They wrote back with our answer.

"We did indeed cross through Louisiana both early and late in October 2018...going into New Orleans from Texas on the 21st and then from New Orleans east into Florida on the 22nd," reads the email.

It would appear our mystery object had been identified. The Goodyear Blimp was on the same flight plan on the same dates as the MUFON and NUFORC reports, matches the description by witnesses from afar, and matches the time frame and speeds in terms of moving from one location to another.
But, of course, there are also sightings in Louisiana still without explanation. Robin and David did the absolute right thing in our book: documented first so they could ask questions later. It's not every day the Goodyear Blimp makes an appearance over Lake Charles, LA. Because of their efforts, we were able to actually identify this unidentified oddity in our skies.
Knowing what we can gets us ever closer to learning of those phenomena which we may feel is unknowable.
Posted by The Old No. 7 Society at 8:29 AM No comments: